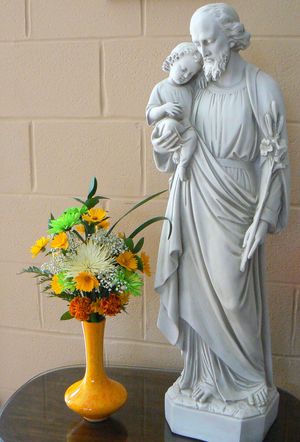 On August 18, 2010, after a lengthy period of community discernment, and with the approval of the Apostolic See and the Congregation for Institutes of Consecrated Life and Societies of Apostolic Life, we rejoiced to become members of the Association of Saint Joseph. This fourth Association of Discalced Carmelite Nuns in the United States was begun after the Second Vatican Council in an effort to prosper authentic renewal as well as to protect the charisms and the traditions of the Order. We are united with a dozen other Carmels of both the 1990 and 1991 Constitutions in a common endeavor to be true daughters of the Church and of Our Holy Mother, St. Teresa of Jesus.

“The practice of the evangelical counsels lived within strict papal enclosure, the apostolate of prayer and contemplation and the traditional austerity of the Order are foundation stones upon which the nuns set out to meet their Bridegroom, Who leads them into the desert and up the holy Mount of Carmel.”

— from the Official Web Site