When Father Gallitzin died in 1840, his model community was well established through his holiness and fervor as a priest, his talents and other sacrifices. The Franciscan Friars of the Third Order Regular of Penance and even the Carmelite Nuns eventually settled here in Loretto to complete his dream of a Catholic settlement that had begun in Maryland.

Here on this “fourth ridge” that shines and flourishes under his watchful care and prayers from the Homeland of Heaven, the Chapel House in which he lived and offered Mass still stands. 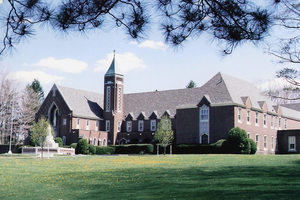 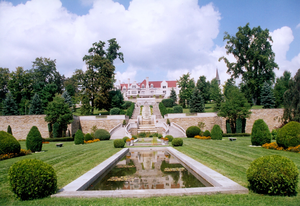 Visitors can see Father Gallitzin’s hand-written note- books which show a delicate, elaborate style reflecting his artistic and refined character. They can also see the chair he sat on to hear confessions, the signs he made to remind his parishioners to take the mud off their boots before entering the Church, and the violin he played, brought with him from Russia, which is still played at special celebrations in St. Michael’s Church. This Church has even been granted the privilege of being raised to the rank of a minor basilica.

Yet more than these material relics are the marks of strong Catholicity which his formation and ministry fostered in the people of this area. A deep love for the Catholic Faith and loyalty to the Church, the Pope and the priesthood, which hands on and nourishes that Faith, continues to impregnate family after family. Surely, it was a “holy man of God” who came to these woodlands and told the people about God’s great love for us and ministered that Love through the gift of the Sacraments and the waters of life flowing out from that Mystery of Faith, the Eucharist, which unites us all in the one Christ, taking us Home to the Father.