Due to his obedience to the wishes of Bishop Carroll, that Catholic community was eventually founded in 1799 in the “backwoods” of Pennsylvania, first known as “McGuire’s Settlement”, on the fourth ridge of the Allegheny Mountains. Later, in 1803, the name was changed to “Loretto” out of preference for Father Gallitzin’s devotion to the Mother of God and the Holy House of Loreto in Italy. 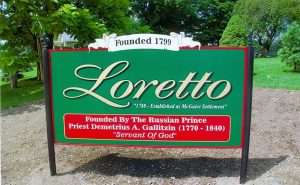 It’s an exciting thought to assume that this newly ordained Priest would surely have visited the Carmelite Nuns while he was in Maryland! Perhaps the Jesuit Superior took him there and arranged for Father Gallitzin to offer Mass in their small Chapel. Had they a visitors’ book, his name may have been inscribed in it as a small treasure for us all.